There is a huge mass of floating plastic in the ocean. The effects of marine pollution and, specifically, plastic are being researched as we speak, while commercial recycling efforts are underway to reduce this growing problem.

When Was the Pacific Garbage Patch Discovered?

The Great Pacific Garbage Patch was initially discovered in 1997 by oceanographer Charles Moore while sailing home to Southern California after finishing the Transpacific Yacht Race. He stated:

“I was confronted, as far as the eye could see, with the sight of plastic … In the week it took to cross the subtropical high, no matter what time of day I looked, plastic debris was floating everywhere: bottles, bottle caps, wrappers, fragments.”

How Big Is the Problem of Plastic Ocean Pollution?

At last measurement, the Great Pacific Garbage Patch or GPGP was upped to more than 80,000 tons, which is at least four times, and perhaps as much as sixteen times, the size previously estimated for this floating pile of plastic.1

This makes the GPGP now double the size of the state of Texas. Finding plastic pollution solutions and controlling the handing of plastic waste is one of the most important topics for commercial waste recycling professionals and environmentalists alike.

Where Did All the Garbage Come From? 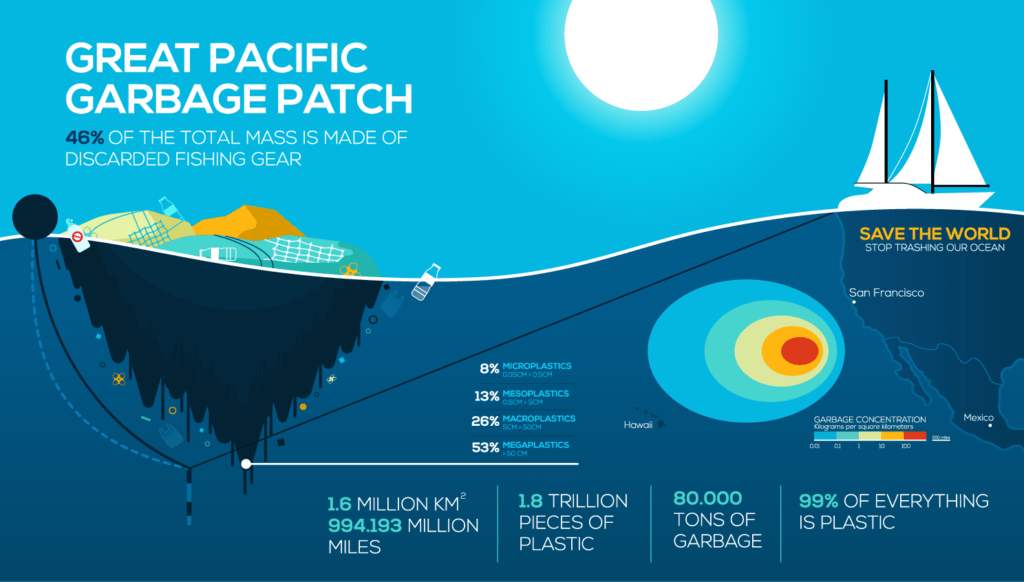 The recent study was conducted by an international team of scientists, six universities, and an aerial sensor company. During the study, the group surveyed and collected trash using devices to measure the found objects. An aircraft was also used and fitted with sensors to collect 3D scans of the “island.”

By the conclusion of the study, the group had collected a total of 1.2 million plastic samples and scanned more than 300 square kilometers.

They found that the huge, swirling pile of trash is made up of many different things. Almost half of it is comprised of “ghost nets,” or discarded fishing nets. Another 20 percent is thought to be debris from the 2011 Japanese tsunami. The majority of the pile contains larger objects, while only 8 percent is estimated to be microplastics (pieces smaller than five millimeters in size). This sheds light on the need for better commercial recycling and waste recycling equipment.

In a statement from The Ocean Cleanup Foundation, Chief Scientist Julia Reisser said, “We were surprised by the amount of large plastic objects we encountered … We used to think most of the debris consists of small fragments, but this new analysis shines a new light on the scope of the debris.”

Because the patch is so large, environmentalists have called on the United Nations to declare the Great Pacific Garbage Patch a country, naming it the “The Trash Isles,” complete with its own passport and currency, called debris. In addition, environmentalists have solicited 200,000 people to become citizens, including celebrities Sir David Attenborough, Chris Hemsworth, and Gal Gadot.

These efforts strive to draw public attention to the impact of plastic pollution and start a dialog about Great Pacific Garbage Patch solutions. The first citizen was former U.S. vice president and environmentalist Al Gore. While done in jest, this move hoped to raise awareness of the ever-growing issue in the Pacific.

What Can Be Done About the GPGP?

Scientists have been studying this area since the 1970s—usually by means of dragging a small sampling net through the debris. This method showed a bias toward smaller objects and did not provide much insight into the larger pieces and, thus, the entire scope of the GPGP. 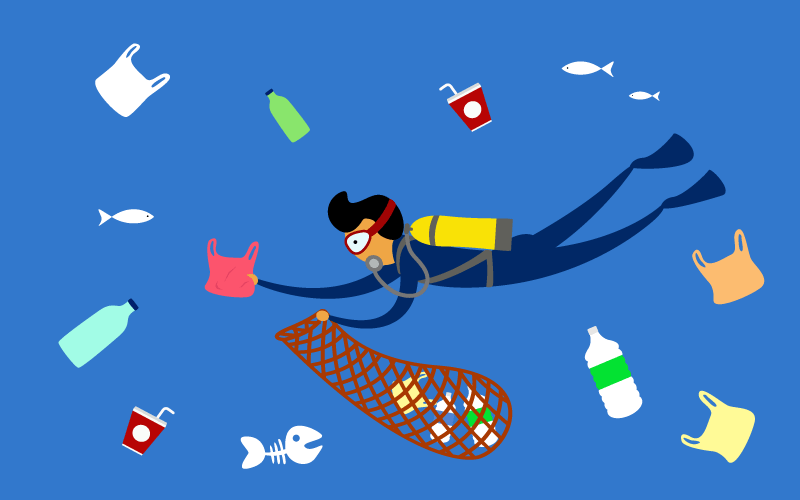 Over a period of several years, The Ocean Cleanup Project gathered data to better understand the problem of the Great Pacific Garbage Patch. Using ocean missions and aerial tracking and utilizing extensive laboratory analysis of samples from all parts of the GPGP, the efforts to understand both the causes and the impacts will guide cleanup efforts to come.

The study went on to conclude that plastic pollution in the ocean is both visible and trackable, helping scientists document it. However, people can help slow it down by recycling and limiting their purchase of plastics and other single-use items. She encourages all to “think about mindful alternatives.”

Global alternatives and objectives may focus on commercial recycling programs and better waste materials management to reduce the number of pieces of plastic that enter the ocean by consumer and industry sources. Your business can help by improving your processing or guaranteeing that all of your plastic waste is properly compressed, baled, and recycled. Call Global Trash Solutions today for the right equipment to stop the permanent plastic problem.